ABOUT THE Maritime Component

MARCOM has teams able to deploy at both inland and in pacific coastal waterways, in support of the CMD’s operations and missions statewide.

We are comprised of individuals with both prior and non-prior service. Prior-service members come from any US branches but are mainly comprised of former US Navy, Marine Corps, Coast Guard and Merchant Marines given their waterborne focus and missions. Our non-prior service members, both welcomed and needed, come from many diverse backgrounds, with experience or training as sailors, boaters, first-responders, medical, and related categories like mechanical repair.

You do not need existing talent or skills directly related to conducting a water rescue mission. We will teach you! There is a continuous need for individuals with a calling to volunteer – we want to talk to you.

Below are the priority experiences MARCOM is recruiting. Again-prior Sea service or maritime experience is helpful, but not required:

naval Battalion of the National Guard of California

California once had its own navy. On September 12, 1891, California established a Naval Militia to provide support to the National Guard (then called the Land Militia). The stand-up effort began with Lieutenant Thomas Nerney, a former Ohio National Guard officer (and later a California Rear Admiral), who championed the effort to create a naval unit in San Diego. LT Nerney pulled in prior members of the National Guard, US Navy, Marine Corps, along with local sailors and others with maritime experience, and built a small volunteer naval force.

Though only needing 80 sailors, at the first muster, 97 individuals volunteered to serve without pay, indeed without much tangible reward. Their ages ranged from 16 to 65 and the occupations included sailors, laborers, jewelers, editors, druggists, grocers, firemen, doctors, mechanics, and even a local carpenter. In the following years, the sailors and eventually Marines of the CA Naval Militia served in the following actions or capacities:

On 18 March 2017, the California State Guard established the Maritime Command (MARCOM) in a ceremony aboard the decommissioned WWII carrier USS Hornet in Alameda, California. Today’s Maritime Command continues the spirit and tradition of excellence of our predecessors, but in a limited role, answering only to the Governor of California.

The Maritime Component provides a mission-ready force which operates in waterways and coastline areas throughout the state, and in support of the California Military Department and our Interagency Partners.

MARCOM trains year-round in two types of water environments: green water and brown water. Green water is the saltwater coastal zones, such as beaches, estuaries, harbors, and bays – up to 3 miles from the pacific shore. Brown water is defined as all other inland water bodies, including lakes, rivers, and reservoirs.

Our sailors train monthly in these environments to ensure safety and proficiency during any declared emergency. Sailors train to a variety of local, state, federal, and specialty standards, and California Military Department standards. This helps ensure the proficiency of our sailor’s ability to deliver crucial services to our citizens in times of need.

California has the most shoreline in the lower 48 states, with hundreds of miles of lakes, rivers, and reservoirs that may experience rain or earthquakes with the potential for resulting flooding or dam failures. Such missions are dynamic events – requiring crews that are trained and ready to respond to any calls for assistance.

Sailors will hone existing skills and while gaining new experience, regardless of any prior experience. MARCOM’s mission will blend both aspects of how both the military and local first responders conduct their jobs. This will depend on the situation and who the requesting assistance.

The Maritime Coastal Command (MCC) is one of two major units within MARCOM. MCC’s report to the MARCOM commander and conducts green and brown water missions in support of the Military Department. The command may operate individually or with other Maritime and/or State Guard Army or Air forces in a joint environment, or with local, county, state, or federal interagency partners in emergencies.

The Maritime Littoral Command (MLC) is another major unit within MARCOM, again reporting to the MARCOM Commander. MLC focuses more on brown water environment, but trains in coastal settings to maintain proficiency on the ocean. Like MCC’s, MLC works with local, state, and federal partners in emergency situations.

ARE YOU READY TO RESPOND? 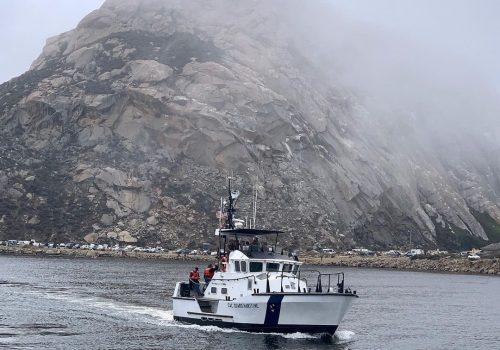